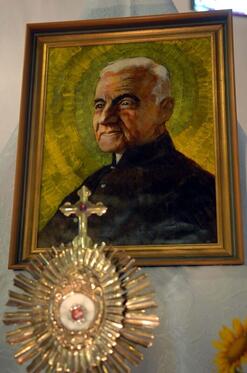 Saint André Bessette, CSC (French: Frère André; August 9, 1845 – January 6, 1937), born Alfred Bessette and since his canonization sometimes known as Saint André of Montreal, was a Holy Cross Brother and a significant figure of the Roman Catholic Church among French-Canadians, credited with thousands of reported miraculous healings. He was declared venerable in 1978 and was beatified in 1982.  Pope Benedict XVI approved sainthood for Blessed André on February 19, 2010, with the formal canonization taking place on October 17, 2010.

​​Saint André Bessette’s Story:
Brother André expressed a saint’s faith by a lifelong devotion to Saint Joseph. Sickness and weakness dogged André from birth. He was the eighth of 12 children born to a French Canadian couple near Montreal. Adopted at 12, when both parents had died, he became a farmhand. Various trades followed: shoemaker, baker, blacksmith—all failures. He was a factory worker in the United States during the boom times of the Civil War.

At 25, André applied for entrance into the Congregation of Holy Cross. After a year’s novitiate, he was not admitted because of his weak health. But with an extension and the urging of Bishop Bourget, he was finally received. He was given the humble job of doorkeeper at Notre Dame College in Montreal, with additional duties as sacristan, laundry worker and messenger. “When I joined this community, the superiors showed me the door, and I remained 40 years,” he said. In his little room near the door, he spent much of the night on his knees. On his windowsill, facing Mount Royal, was a small statue of Saint Joseph, to whom he had been devoted since childhood. When asked about it he said, “Some day, Saint Joseph is going to be honored in a very special way on Mount Royal!”
​
When he heard someone was ill, he visited to bring cheer and to pray with the sick person. He would rub the sick person lightly with oil taken from a lamp burning in the college chapel. Word of healing powers began to spread.

When an epidemic broke out at a nearby college, André volunteered to nurse. Not one person died. The trickle of sick people to his door became a flood. His superiors were uneasy; diocesan authorities were suspicious; doctors called him a quack. “I do not cure,” he said again and again. “Saint Joseph cures.” In the end he needed four secretaries to handle the 80,000 letters he received each year.

For many years the Holy Cross authorities had tried to buy land on Mount Royal. Brother André and others climbed the steep hill and planted medals of Saint Joseph. Suddenly, the owners yielded. André collected $200 to build a small chapel and began receiving visitors there—smiling through long hours of listening, applying Saint Joseph’s oil. Some were cured, some not. The pile of crutches, canes and braces grew.
​
The chapel also grew. By 1931, there were gleaming walls, but money ran out. “Put a statue of Saint Joseph in the middle. If he wants a roof over his head, he’ll get it.” The magnificent Oratory on Mount Royal took 50 years to build. The sickly boy who could not hold a job died at 92.
He is buried at the Oratory. He was beatified in 1982 and canonized in 2010. At his canonization in October 2010, Pope Benedict XVI said that Saint Andre “lived the beatitude of the pure of heart.”

Reflection:
Rubbing ailing limbs with oil or a medal? Planting a medal to buy land? Isn’t this superstition? Aren’t we long past that? Superstitious people rely only on the “magic” of a word or action. Brother André’s oil and medals were authentic sacramentals of a simple, total faith in the Father who lets his saints help him bless his children. 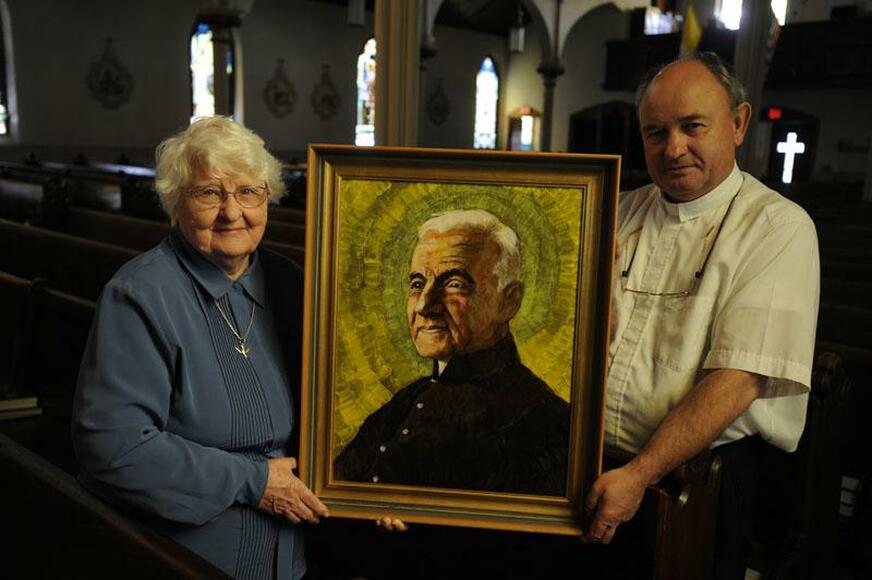 In this July 1, 2010 Day file photo, Sister Blanche Cadotte, of All Hallows Church, and Father Damian Tomiczek, SDS, pastor of the All Hallows Church, located in the Moosup section of Plainfield, hold a painting of Andre Bessette (1845-1937).
Prayer to Saint André for Healing
Saint André,
I come to you in prayer for healing.
(state your intention)
You were no stranger to illness.
Plagued by stomach problems,
you knew suffering on a daily basis,
but you never lost faith in God.
Thousands of people have sought your healing touch
as I do today.
Pray that I might be restored to health
in body, soul and mind.
With St. Joseph as my loving Protector,
strengthen my faith and give me peace
that I might accept God’s will for me
no matter what the outcome.
​Amen.

Prayer for the Intercession of Saint André
Lord, you have chosen Brother André
to spread devotion to Saint Joseph,
and to dedicate himself
to all those who are poor and afflicted.
Grant through his intercession
the favor that we now request ...
(state your intention)
Grant us the grace
to imitate his piety and charity,
so that, with him,
we may share the reward promised
to all who care for their neighbors out of love for you.
We make this prayer in the name of Jesus the Lord.
Amen.

Collect from the Memorial of St. André
Lord our God,
friend of the lowly,
who gave your servant, Saint André Bessette,
a great devotion to Saint Joseph
and a special commitment to the poor and afflicted,
help us through his intercession
to follow his example of prayer and love
and so come to share with him in your glory.
Through our Lord Jesus Christ, your Son,
who lives and reigns with you in the unity of the Holy Spirit,
one God, for ever and ever.
Amen.